Last night while sitting around a table sipping celebratory drinks after closing one of the most challenging and successful productions I’ve ever had the honor of being a part of, a friend said casually to another “Well it’s August 16th now.”

I don’t know what this was in response to, but for a second my heart seized up.

A year ago to the day, the final big shoe dropped during what had already been the hardest year of my life.

I leaned over to my dear friend – one of my favorite humans – and said something regarding the date’s significance.  Being the super smartypants he is, he asked something along the lines of: *Are you happier now than you were the day before that happened?*

Passage of time is odd. Some life mile-markers are predictable while some sneak up on you or just plain ol’ smack you in the face.  August 16th, 2014 was an unexpected smacker of a mile-marker. And while I am soooooooo far down the road past that sucker and the dark clouds now – there are still rare moments when I mentally road-trip back to the feelings and difficulties of that point in my life and let the clouds back in. So it was nice to have August 16th, 2015 slowly creep up unnoticed until mentioned in a bar with friends while riding a high after closing an amazing show.

These past 12 months have contained both some of the most trying and some of the most gloriously happy moments I have ever known. I have challenged myself and have been challenged by others. I’ve had ridiculously difficult conversations with people I love and with myself. I have become more honest and transparent. I have said “FUCK YES.” to things that scare me (in the good way) and have pushed my own boundaries. I have sought out amazing new friendships and have deepened the love in existing ones. I have re-focused. I have re-discovered.

Essentially, I have come home to my own bones – as a human; as a woman; as an artist.

*Are you happier now than you were the day before…?* 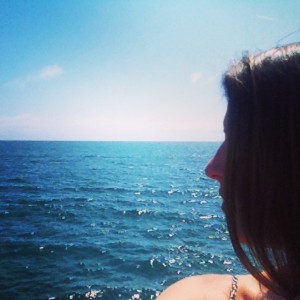 This year has been a lot about vulnerability. Being blatantly honest. Making bold choices. Having ballsy conversations. Baring myself to people in my life and the world without shame or hesitation. “Doing the damn thing.”

So it is only fitting that a few months ago I said “YES!” to taking on a theatrical role that literally means stripping down in front of an audience; dancing in my underwear; and twirling tassels while looking theatre-goers in the eyeballs and talking to them.

Charlotte aka “Cheeky Charlie” is an atmospheric character. Her storyline in this iteration of The Last Burlesque is very simple. But while she doesn’t ask me to delve deeply in an emotional way, she – in all her simplicity and sexuality – is a gift and a treasure. Charlotte approaches the world with enthusiasm and is shameless in her love of her body and life; she wants to spread the love.

Shit goes down? Life isn’t what you expect? A tassel flies off? “Oops! Don’t worry about it, Sweetheart! Just stick it back on and keep going! And don’t forget to smile, everyone! SMILE!”

Cheeky Charlie is only serious about not being serious. (photo credit: Ryan Maxwell Photography)

As someone with a past with disordered eating and body image issues, this small role is even more monumental. I have never before talked about this struggle in an open or public way, but from age 13 – 24, I battled intensely and often silently with my body.

I warred with myself violently in my teenage years because I sought a physicalization of an idea of “perfection” that is utterly unattainable. As an adult-ish in my early twenties, the issue was not as intense but still quietly lingered and re-surfaced from time to time.  I (thank goodness) finally came to a form of bodily acceptance in my mid-twenties. Though the newly found “I’m beautiful the way I am” mindset excused a different kind of damaging behavior – eating crap, drinking too much booze, and settling into physical stagnancy which often left me feeling sluggish and sick.

In the last year, I’ve changed emotional and physical habits. It would be disingenuous to not admit that a lot of the habit-shifts came out of a painful break-up from a relationship that had also become stagnant and unhealthy.  But that split gave me the opportunity to assess the way I was living and in the habit-shift, I have become the healthiest I have ever been.  And not through anything bonkers. Through better choices. Through listening to my physical self in a way that has led to feeding both my body and soul in the manner that they apparently need.  It would also be disingenuous to not admit that after spending a chunk of my later 20’s feeling under-valued in many ways, the gift of playing a character who values herself as all-around beautiful has not been lost on me.

Charlotte has come along at the perfect time. I am finally comfortable in my skin. I am mature enough to embrace the stretch marks and cellulite alongside gentle muscle tone. I dictate my own value – and it is no longer reduced to my appearance. Granted my body can do incredible, beautiful things. Also HILARIOUS things that the audience gets a kick out of.  It’s slightly reductive to say this … but it’s pretty cool.

I am so grateful for art. For the way that the right shows happen to come around at the right times and challenge parts of me that need stretching and pushing and illumination.  I am grateful for my beautiful cast and production team who are supportive and adventurous and body-positive. And I am so grateful to my dear friend the playwright along with the director and casting team who unknowingly gave me this opportunity to put to bed some old ghosts and grow some new love.

… Not to say I wasn’t flipping my shit before going on in front of an audience for opening night.

Before heading onstage for the tassel twirling scene with a real crowd for the first time, I was so nervous that my actor-brain was working overtime and lines were flying out of my head.

Panicked, I looked at my scene partner backstage during the last lines of the scene before ours and said:  “I say ‘Because of self-consciousness… then YOU say ‘eyes up here, ladies!’ then I say what!?!? WHAT!!?? OH MY GOD. WHAT DO I SAY!!”

And as the previous scene ended, he said: “It’ll be alright.”  And urged me on stage.

And he was right.

The lines came. The robes came off. The tassels twirled.

Years of build up. 17 years of concern over what I look like. Out the door.

I did the damn thing.

And the audience cheered.

And even if they hadn’t, a part of myself cheered.